With our vast experience in providing music for wedding ceremonies, receptions and late night sing alongs over the past fifteen years throughout Munster, Ireland and indeed worldwide, Bellecanto are well suited to providing the perfect accompaniment for your special day.

On this website we have provided a comprehensive list of songs/instrumentals guaranteed to create a wonderful atmosphere for your ceremony/drinks reception. This list is constantly updated and we are always delighted to learn new material upon request.

For our late night sing alongs we can provide song booklets for your guests with well known favourites. We find this encourages people to gather around the piano with us creating the perfect end to your perfect day.

Please note that the way in the pieces are ordered may be changed around to suit your needs. They are merely suggestions as to where you may like to include them

Click the tabs below to view our wedding songs:

Signing of the Register 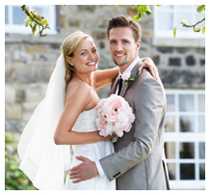